A pivotal project is going to revamp the business connections in Israel’s north: from October onwards a 40-mile rail line is going to connect Haifa with a terminal just five miles short of the Jordanian border. The idea of this railway is anything but new – in 1908 the Hejaz railway connected the port of Haifa with the East. However, this connection had been idle for a long time. 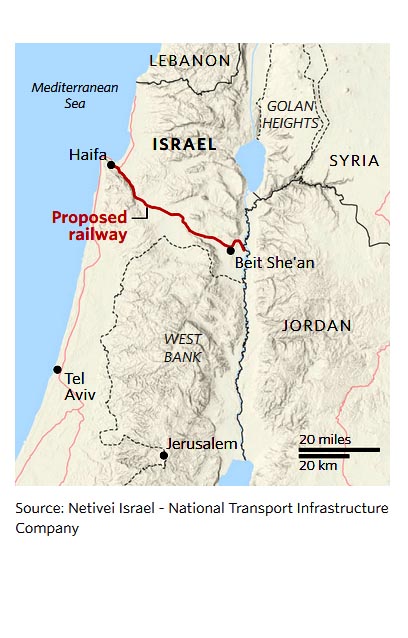 While cargo between Israel and Jordan increased by 65% in the past five years at the Sheikh Hussein transit station and the number of trucks almost quadrupling – a growing market is pretty much guaranteed. Jordan serves as trade-gateway with Saudi Arabia, Iraq and other Arab countries. Another reason for the rising demand of Israeli-Jordanian trade routes, including this new rail connection, is the war in Syria that put a hold to using other trade routes.

However, as prospering as the Israeli-Jordanian business relations might be, other Arab countries are less intrigued to use the Israeli line. According to Israel’s Transportation Minister Yisrael Katz, other Arab officials are reticent to publicly discuss ties with Israel, including transportation issues, for fear of alienating their pro-Palestinian public.

“We always thought that this line symbolizes peace with the region,” said Ilan Rozenfeld, the project director for the new 40-mile railway line that cost around $1 billion.

After recent meetings between Israeli and Jordanian Energy Ministers in the UAE, an agreement was made

Haifa’s public transport system is receiving a big upgrade. With the recent opening of the new

Unemployment Rate in Israel Lowest Ever

Working steadily to push Israel’s unemployment rates below 4% is Moshe Kahlon, Finance Minister, who saw a drop from 4.3% … More

Could HIV Cure be Close?

For the past three consecutive years, HIV/AIDS cases have been on the decline in Israel. This is thanks to the … More