The central theme for this year’s Holocaust Memorial ceremony is ‘Everything is Forbidden to Us, and Yet We do Everything”: The Struggle to Maintain the Human Spirit during the Holocaust.’ Not only for those who commemorate the perished Jewish people on Yad Vashem’s central square but for the whole country, it is one of the most emotional moments of the year when six Holocaust survivors light torches on the evening of Israel’s Holocaust Memorial Day.

While their life stories and war experiences are depicted in short videos, family members hand them burning sticks to light the torch in memory of the six million Jews who were murdered during the Holocaust.

This year’s first torch is going to be lit by Sara Kain (previous Izikowich) who was born in 1919 in Kassa (Košice), Czechoslovakia, to a religiously traditional family of eight. In June 1946, Sara reached Israel.

The second torch is lit by Robert Tomashof who was born in 1916 in Dolný Kubín, Czechoslovakia, to a religious family of eight. In 1946, he married Miriam, an Auschwitz survivor, and they immigrated to Israel in 1948.

The third torch is lit by Jehoshua Hesel Fried who was born in 1930 in Velké Kapušany, Czechoslovakia, to a family of nine. In March 1947, he boarded the Moledet, bound for Israel. The British detained the ship and transferred its passengers to detention camps in Cyprus, where he studied Hebrew. In February 1948, Jehoshua finally arrived in Israel.

The fourth torch is lit by Joseph Labi who was born in 1928 in Benghazi, Libya, to a family of 19. On returning to Benghazi, Joseph met soldiers from the British Army’s Jewish Brigade who suggested that he come to Eretz Israel. “I went to the train station. Somebody gave me a hat and dressed me in a Jewish Brigade uniform and put a bunch of forms in my pocket,” said Joseph. “I boarded the train dressed as a soldier and we went to Alexandria.”

The fifth torch is lit by Chaim Grosbeinwho was born in 1937 in Dołhinów, Poland (today Dauhinava, Belarus), to a religious family of four. In the early 1960s, Chaim immigrated to Israel.

The sixth torch is lit by Lonia Rozenhoch (previous Wudka) who was born in 1920 in Radom, Poland, to a family of five. In March 1948, Lonia boarded a ship bound for Haifa. She moved to Kibbutz Afikim, where she married Jacob and worked as a teacher of young immigrants. 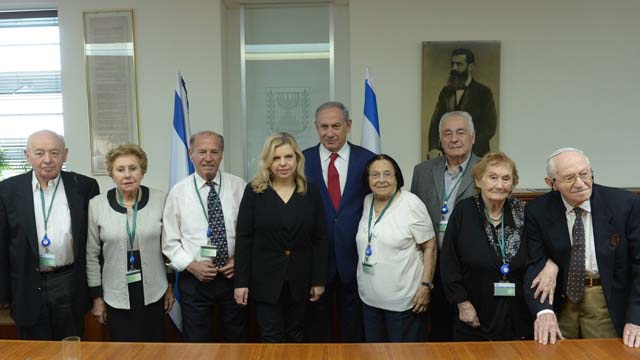 PM Netanyahu and his wife with this year’s torch lighters (Credit: GPO)

The ceremony is broadcast live on Wednesday 4 May at 8pm on television on Channels 1, 2, 10 and 33, on Channel 9 in Russian, and on the news website Walla as well as on radio on Kol Israel and Galei Zahal. It will last about 75 minutes.

Over seventy years after World War II ended, over a million victims of the Holocaust remain

Another International Holocaust Remembrance Day passes, and sparks of sadness simmer within, right beside small bursts

We need to talk about plastic. Over 300 million tons of plastic
Water is an absolute necessity to all humans, but for one third
Whatever you think you know about people with disabilities, forget it, and
For anyone who has been to Israel, a common thread plays throughout
The trees are officially growing bras in Tel Aviv, as over 100
Go to Top