“Left foot forward, right foot forward, rotate the left arm, rotate the right arm, one step forward, one step back”. Choreographer Shuli Enosh casts a watchful eye around the group, a motley mixture of 15 dancers, scientists and Parkinson’s patients. Shuli smiles and counts in: “One, two, three,” then she repeats the modern variation of the Israeli folk dance. When Rita Arditi loses her balance briefly, she compensates for it deftly with a couple of little steps. Anywhere else that would be embarrassing. But in the scientific dance project “Störung” a few minor mistakes are not worth mentioning. 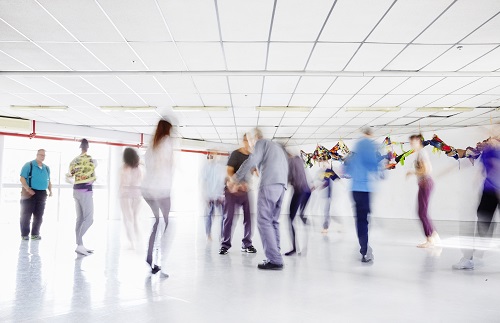 For eight months choreographers, scientists from renowned research institutes and Parkinson’s sufferers in all stages of the illness have been meeting in Tel Aviv and Freiburg for dance classes with a scientific background. “For these precious moments that I’m dancing I can feel my old life again,” says Danny Neumann and beams. The 67 year old’s right hand shakes incessantly as he talks – one of the unpleasant side effects of Parkinson’s. When he notices someone is looking at his hand he takes up the rhythm of the music and taps it on his thigh. “What they see is the tremor. What they don’t see is how emotionally draining this illness is,” explains Neumann, who works as a psychologist. He calls Parkinson’s a mean disease: It impairs the coordination of the motor nerves, the muscles no longer obey the brain’s instructions, add to that dizziness, or sometimes the muscles go stiff and you feel paralysed. Or you shake. But on this Monday his bright eyes speak of something else: joie de vivre, a love of movement and the certainty that he need not feel ashamed.

“For Parkinson’s patients dancing is like being upgraded from Economy to Business Class,” explains dance therapist Tal Shafir from the university in Haifa. “Dance stimulates the brain for everyday tasks, it trains the memory, visual perception and motor skills,” explains the expert for how dance and movement affect the emotions. In scientific terms, dance triggers the release of the neurotransmitter dopamine, and its lack in Parkinson’s patients is responsible for the deterioration of the motor skills.

Shafir is also the person to contact for Nimrod Levin and Dorit Guy-Jelinek in the year-long interdisciplinary dance project. The two students are studying human movement and in interviews with the Parkinson’s patients ask what it means to lose control of these skills. The comprehensive Israeli-German project comprises five core scientific projects. “We work with three groups, post-graduate students, Parkinson’s patients and artists,” explains Nimrod, who is himself a post-graduate student at the Hebrew University in Jerusalem. In addition, in the course of the year they have created three other artistic and philosophical projects.

A pleasant side effect of this project is that the students have also learned something completely different, namely cooperation and the subtleties of bilateral collaboration. “Quite apart from the different mentalities in Germany the dancers come from all over the country, while almost all of the scientists are in one place. In Israel it is exactly the other way around,” says Levin, who in addition to his research work joins in the dancing in Tel Aviv. During the first part of the final congress in Tel Aviv in early December he held a talk entitled “The importance of research in dance, therapy and science”.

Until the congress he put up the Freiburg psychologist and dancer Lisa Klingelhöfer. She integrates the emotional impressions from the dance classes into her study. Lisa explains: “Patients are under huge emotional stress.” And Tal Shafir adds: “Dancing improves people’s moods and relieves depression.” For many Parkinson’s patients the dance class is a weekly highlight, because they are with fellow sufferers and there is physical contact, something that is often missed. In mid-December Klingelhöfer will talk about her research at the second part of the final conference in Freiburg.

“It would be easier to sit down and sink into self-pity, but once you have managed to move you feel better,” says Danny Neumann firmly. In the eight months of the project so far only three participants have dropped out for private reasons. He says his favourite poem by Dylan Thomas expresses his attitude to dance really well: “Do not go gentle into that good night,” the 67 year old cites while he slowly pulls on his quilted gilet and sets out carefully on the 90-minute journey home.

With a massive wave of COVID-19 hitting India, lack of equipment, organization,
When 65-year-old Sarah Halimi was in her apartment in Paris, her 27-year-old
Making up only 2% of the Arabs in Israel, the Druze of
Mitzpe Ramon, a small Israeli desert town in the middle of the
After three and half years of research, Professor Jacob Hanna of the
Go to Top