The trees are officially growing bras in Tel Aviv, as over 100 bras have been hung on the central ‘Tree of Life’ which sits amidst Habima Square. Though many locals questioned the newest exhibit with curiosity, it proves how crucial these kinds of attention grabbers are to introduce October as breast cancer awareness month in Israel. 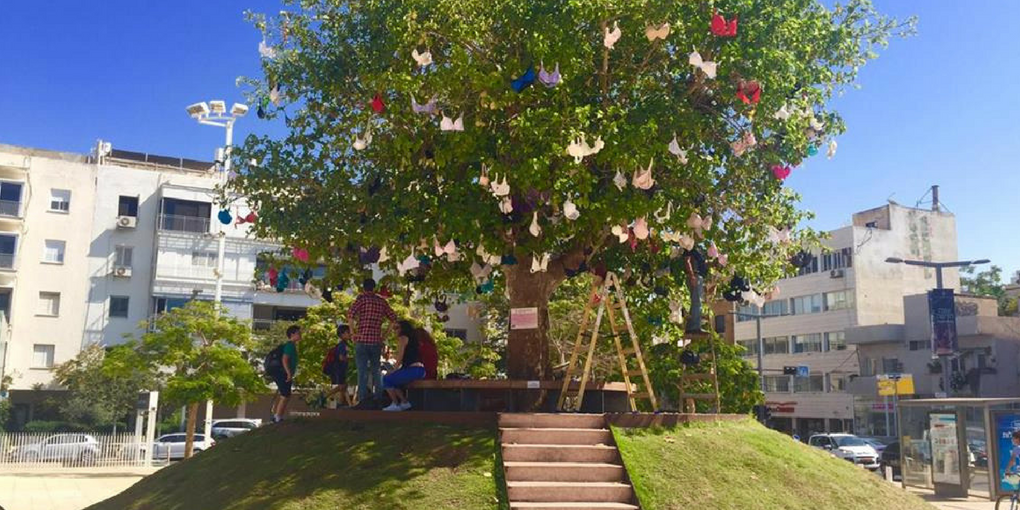 About one in eight women in Israel is affected with breast cancer, which matches the stats around the world. Breast cancer is the number one killer for women from the ages of 20 to 59. This means that waiting to get a mammogram at 40 is no longer an option, and one must become in tune with her body and bumps way before then. A recent Israel study also found that no smoking and exercise very much decreases the risks of breast cancer. Though Israeli women live longer, they are also more prone to breast cancer.

The Israel Cancer Association’s Director, Miri Ziv, states that “Fear, lack of knowledge, or misinformation regarding breast cancer are factors that prevent many women from taking responsibility for their health, becoming acquainted with their breasts and undergoing early detection exams. About 90% of patients can be cured if the disease is detected at an early stage. Early detection is the most effective proven means of fighting breast cancer.”

Only in recent years have such public stunts inspired the community to pay attention and this October, the city will be run with breast cancer awareness events and fundraisers. In addition to the newest installation for the Tree of Bras, an international women’s wellness community called School of Shine is hosting Breastival Tel Aviv 2017 on October 24 to raise funds and awareness for women who have been touched by cancer.

Instead of the standard “key between the fingers” or readily gripping pepper spray in your purse,

The trees are officially growing bras in Tel Aviv, as over 100 bras have been hung on the central ‘Tree … More

A 30-year study on 1,200 Israelis shows that optimism might extend lifespan.
Despite the turbulent moments of 2020, Israel healthtech is back on the
With recent FDA approval, Israel is preparing the next round of vaccinations
With a massive wave of COVID-19 hitting India, lack of equipment, organization,
When 65-year-old Sarah Halimi was in her apartment in Paris, her 27-year-old
Go to Top