When I came to Israel for a two month stint, I didn’t expect to fall in love with this crazy little country. People sometimes ask me if I literally ‘just’ moved to Israel ‘like that’. Well, yes. It was an overnight decision, anything but rational and probably one of the best decisions of my life. And it’s been four years since then.

I struggled with Hebrew, the traffic, the mentality, the winter and the summer. But I knew, this is the right place for me. Why? Well, not even I can answer that.

But the best doesn’t mean the easiest. My initial Hebrew knowledge comprised ‘Shalom’ and no, not every Israeli is comfortable with English. I had to argue with Israelis who tried to persuade me that EVERYONE speaks English. No. Not true.

I was used to bicycle-friendly drivers and not to being almost run over and yelled at (for what? existing on the street?). Israelis love to interpret zebra crossings, green traffic lights, and bicycle lanes in a different way. Speaking about different: I was openly told when I gained or lost weight, complete strangers commented on my eyebrows/dress/bag/accent/attitude, and in her well-meaning way, a lady took the bag of washing detergent out of my hand and let me know that the other is better than my choice.

This country confused me and even after being here for years.

On the same note, someone paid for my bus ticket so that I could make it to the train on time. When I said that I was thirsty, random people offered me their bottle of water – on the street. And I gladly accepted it and started doing the same  Whereas four years ago, I wouldn’t have shared a glass of water unhesitatingly.

When I made fun of the ‘gosh that tough’ Israeli winter, which isn’t tough for me at all after having lived in Bavaria for two decades, winter taught me different: a snowstorm hit Jerusalem, I had to be sheltered for three days without electricity and learned the importance of candles, batteries and the fact that most ovens run with gas. And the overwhelming hospitality of taking me in without asking for anything in return.

This happened on an even larger scale:

When I arrived, I was accepted and loved by a family that is in no way related to me. And yet, I was treated as their third daughter, including family meals and holidays.

I met the most open-hearted people, discovered true friendship, experienced that you don’t need to hide any emotion when out in public, danced to the magic of the desert and the mesmerizing milky way, meditated during full moon nights and cursed sand storms (and sand grains in the weirdest of places months later).

Time passed and I became more and more accustomed to my life in the Middle East.

Yet the one thing that I never came to terms with is the response to criticism. Even when you like/love a place, you should, in my opinion, be allowed to say what you dislike, what you disagree with and why. However, criticising Israel in Israel with Israelis was rarely accepted as such. In my experience the majority comes up with explanations and comparisons, while the others opened up with more anger and frustration.

However, the same was true for conversations abroad.

I rarely felt that people understood my thoughts or what was going on. And yes, I am aware that neither Israel nor Germany are easy topics. Still, on both sides people often had this inexplicable urge to lecture me. At best. At worst, I was yelled at, I was belittled, and provoked. In Israel and in Germany. And as if this wasn’t enough, the same is true for passionate Israel lovers who won’t allow an inch of criticism and accused me in return for being Anti-Israel or Anti-Semitic or both. But – with all due respect – why?

So here is something I never understood:

Neither Israelis nor Germans find it easy to take Israel as the country it is. With the good and the bad.

While trying to grasp the whole picture is the essence of moving to a new place, I felt I was alone with that. In a nutshell, I understood that immediate comparing and using other facts to highlight something positive or negative doesn’t get me anywhere. Things are the way they are, regardless if it is better or worse somewhere else. That is my personal viewpoint and idea of how to remain open.

So this will be my challenge for the next months.

I will try to not compare the depth of friendships, the taste of tomatoes and cucumbers, the beauty of Christmas markets, the weather or the openness of people. I will try to grasp the whole picture while I am abroad.

Only then, after I allowed myself to make up my own mind about Berlin, I will share my perspective on the Israeli scene in Berlin, cheaper food prices and affordable rents, refugees, Turkish supermarkets and the feeling of starting a new episode of my life.

And just in case I miss Israel too much, I can simply walk for five minutes to a fun little café called ‘Gordon – Tel Aviv – Berlin’ down the road. 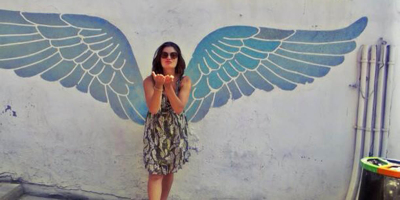 We live in a world with so many sides, yet somehow our language has whittled its

Mitzpe Ramon, a small Israeli desert town in the middle of the
In families where domestic violence is part of everyday life, they suffer
As Israel enters its tenth month of experiencing COVID-19, officials are hopeful
Paralysis didn’t stop Bracha Fischel from becoming a skilled and sought out
What if energy production was not only climate-friendly but also supported flourishing
Go to Top