Eshkol could be used as a synonym for growing potatoes and tomatoes – literally. The area is so rich that its harvest covers around 70% of the produce in Israel. However, the population of 14,500 in the 31 communities, kibbutzim and moshavim have to readjust their priorities at the moment: Hammas’ tunnels, permanent rockets and the noise of the Israeli forces in Gaza. Four people report exclusively for GIS about their everyday life during the war. 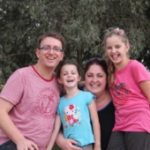 Tamara, grew up in Hannover, Germany, works in the local administration, mother of two girls, lives in Ein Habsor, six kilometres outside Gaza.

“Since the beginning of the operation ‘Protective Edge’ we have been sleeping in the shelter, all four of us perched onto a few mattresses. My husband and I try our best to make our girls feel safe. But it isn’t easy and our seven-year-old daughter has been traumatised after a Quassam rocket hit a parking lot right next to us. Our ten-year-old daughter stayed with her grandmother for a couple of days outside the Eshkol region but she wanted to return after three days, despite the ongoing conflict. For us, it doesn’t feel like a military operation, it feels like war.

Every time I go to the supermarket, I am scared.

Last week our windows burst because of the rockets from Gaza. Every time I go to the supermarket, I am scared. In addition to that, we constantly hear the Israeli attacks in Gaza and particularly at night it is hard to fall asleep. At least we have shelters, even if we only have 15 seconds to run to them. We have been living here for seven years and it is the third time we experience a war. Of course we have been considering moving away, but this is home. Yet, after this war finishes, we might need posttraumatic therapy.”

“At our Kibbutz Urim we not only hear what is going on in Gaza but also many airplanes and helicopters from the nearby military airport. It is extremely tragic when the helicopters arrive from the West – that usually means they are transporting somebody severely injured from Gaza.

Many soldiers stop by at my workplace, the senior citizens’ day care centre in Neve Eshkol, where the Israeli-Swiss Society built the Swiss BrainPath project with its mind activating parcour for young and old people. We offer food and drinks to the soldiers, they can charge their phones and take a shower – but everybody is extremely worried and tense since they know they have to return immediately. 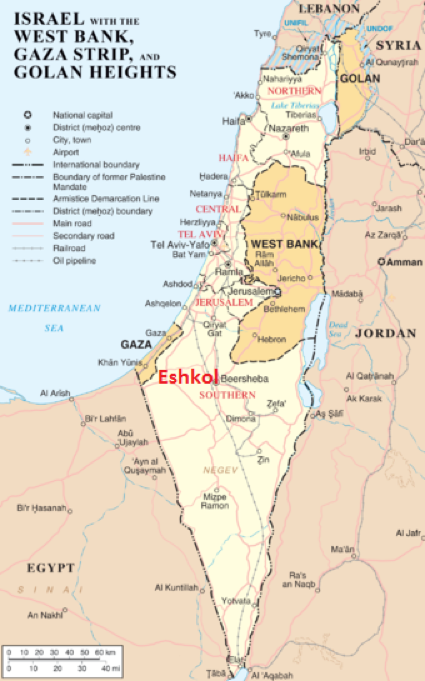 The dining room also serves as huge shelter, so we spend most of our time there. The senior citizens are not alone and the community feeling is very good. It is extremely important for the elderly that we are always here. Yet the situation is anything but easy, many old people prefer to be at home but at the moment this is simply not a safe option.

We offer food and drinks to the soldiers

Many communities are almost deserted, there is a lot of damage. I just talked to a lady whose bedroom was hit by a rocket a few minutes after she left her flat. We are constantly worried, not mainly about our own safety but about every single community. I have been living here for 20 years, and during war times the solidarity amongst the people is even stronger.” 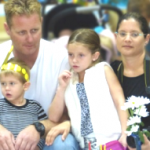 Sharon, lives and works at Kibbutz Magen, five kilometres from Gaza. Her parents are from Switzerland and Austria. Sharon has two children.

“Our lives have changed dramatically. An hour ago, a Quassam rocket hit our Kibbutz but thank God, it only caused damage. We try our best to live a normal life but it is quite a task given the threatening circumstances. Our children are only allowed to play nearby our house or the kindergarten so that they can always run to a shelter. Many people sleep in the kindergarten because not every house has its own shelter.

The biggest threat is the tunnels. We are now used to the rockets and firing, after all we have been living here for 13 years; we know where to find the next shelter, but the tunnels leave us helpless and frightened. We don’t know if there won’t be armed people outside our house, coming through the tunnels. This is exhausting. We do trust the Israeli army and our security staff at the Kibbutz, but I am still petrified. I do ask myself: How can I protect my children? We try to calm them down. For example, we say ‘Good morning’ and ‘Good night’ to the rockets. My seven-year-old daughter and her friend even wrote a song about the rockets and my little son plays happily in the pool while the rockets are literally flying over his head.

I also can’t forget the children in Gaza, just two nights ago there was a massive rocket attack on Gaza that sounded like a storm without rain. We need a political solution and a peace treaty – as well as a solution for the danger from the tunnels.” 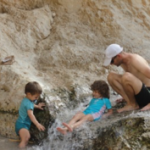 Michael, lives in Ein Habsor, six kilometres from Gaza. He works at Kibbutz Magen and has two sons.

“The situation is incredibly frustrating because nobody knows when it is going to end. Let’s be honest: It has been going on for more than three weeks and nobody is able to predict an end. We’ll never get fully used to having rockets all around us.

I remember that we used to go to the beach in Gaza when I was a child. I tell this my children who are three and six years old. With this I try to relax them and to show that there used to be a normal life in Gaza.

Nobody knows when it is going to end

Not long ago my six-year-old daughter asked me why the people in Gaza shoot rockets. It is a tough question and even tougher to answer in a way a child would understand. I assume the children in Gaza ask the same question.

While the children sleep in the shelter, we adults sleep in our bedroom. My parents, however, don’t have a shelter at their house in Kibbutz Magen. But they don’t want to leave either, it is their home after all.

The only thing that makes me optimistic is the fact that we in Israel are the only ones with freedom in the whole Middle East. We can vote, we can come and go as we please. This is not the case in our neighbouring countries that are not democratic. The situation has become even less stable after the Arab Spring, let’s only think of Syria, Egypt – and Gaza.”

‘Today’s inauguration marks the beginning of a beautiful story: The GripsPfad shall bring pleasure to many